BHR Hollywood Reports..........Fans and foes alike were giving RHOA Kandi Burruss and her restaurant a hefty piece of side-eye once reports went public about a recent health inspection visit.

After the news went viral, Kandi gave an exclusive interview providing clarity about the controversy.

Find out what happened and if you should eat at the Old Lady Gang restaurant!

finally opened this spring and was graded a "C" by the Georgia Health Inspector according to online records dated August 24. Yikes! Here were some of the establishment's codes in violation listed online by the Georgia Department of Health:


However, records also show that another inspection was performed on August 28, where the restaurant received an "A" after fixing the previous infractions. We guess Kandi had to boss up on her staff to get to get the job done. 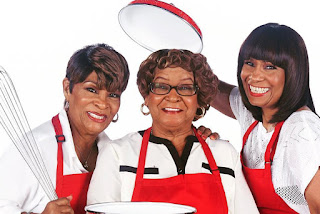 "I want to be open for a month before we do a big grand opening, and that's just because clearly people are just waiting for something negative to say about me," Burruss told sources back in March.

"So I have to make sure my staff is on point and make sure the kitchen is running on point. Everything has to be perfect before we make big announcements.

So what I was told, the best thing to do is to do a soft opening, which is just [it's] open without telling people. And then just let the staff serve people and then we know who we need to fire or keep on."

"We did receive a C because of minor things like we ran out of paper towels by the sink, or someone was missing a hair net… we quickly corrected those things & now have an A," she said. "I’m sure those people who were googling had to see the A but they failed to mention it,” she stated after news broke of the bad rating.

Kandi added, “I just don’t understand why people don’t want my family and I to be great. We love our customers and someone from my family is always there to greet people and give hugs.”


In case you were wondering what OLG was serving up, it's menu includes decadent Southern favorites like fried chicken and French toast, shrimp and grits, catfish strips and more.