RHOA Star Kenya Moore And Kim Zolciak Are Bumping Heads !! Find Out Why 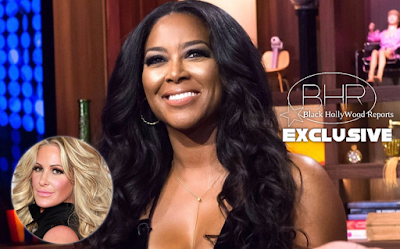 BHR Hollywood Reports............Kim Zolciak raged out on Kenya Moore because she thought Kenya said something about her son, who was horribly injured by a dog bite -- and it took several cast members to hold her back.

Multiple 'RHOA' production sources tell us Kim went all Mama Bear while they were shooting over the weekend at a home in Atlanta. We're told Kenya and Kim were throwing shade as soon as they saw each other -- but when things got personal, it got out of hand.

Kim made comments about Kenya's new marriage being fake ... and Kenya fired back that Kim had pimped out her daughter to get John Legend tickets. Everyone we spoke to agrees to that much, but here's where it gets messy.

We're told Kim thinks Kenya said the Legend tix were for "your injured son." Others in the house say they never heard Kenya say the son part. Doesn't matter ... Kim was convinced and lost it ... rushing at Kenya, knocking over and breaking glasses on the way.


Cast members and production staff grabbed Kim and calmed the situation. We're told Kim immediately bounced, and is genuinely pissed -- not just "for the show" drama ... like last season.