BHR Hollywood Reports.......Halley Berry Shocked the internet recently when she walked the purple carpet at the Annual Chrysails Butterfly Ball Cradling what appeared to be a baby bump.

Halley Berry's rep has denied that the Oscar winner is pregnant with the third child.

"it is absolutely not true. She is not pregnant. The actress rep told reports.

Berry, 50 first sparked pregnancy rumors when she was in a form fitting silver sequined dress and a jacket , placed her hands on her stomach and appeared to be cradling a baby bump. 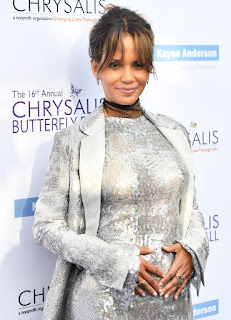 She also responded to the rumors her self claiming "can g girl have some steak and fries ?"