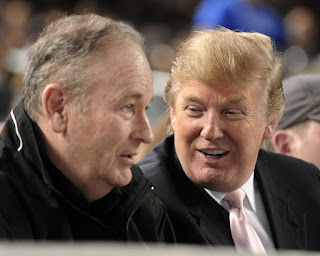 The comments came days after the president proclaimed this month as "National Sexual Assault Awareness and Prevention Month" where he said "we must develop meaningful strategies to eliminate these crimes" and "protect vulnerable groups."

O'Reilly has denied the merits of all the claims against him, 21st Century Fox said in a statement.
Trump had his own run-in with sexual harassment accusations last October, after an Access Hollywood tape surfaced in which he said he grabbed women by their genitals.

"I don't even wait," Trump can be heard saying in the tape. "And when you're a star, they let you do it, you can do anything."

Last week, Trump declared April 2017 National Sexual Assault Awareness and Prevention Month, pledging that his administration "will do everything in its power to protect women, children, and men from sexual violence."

Trump's defense of O'Reilly was similar to his defense of former Fox News chief Roger Ailes last year, when Ailes was facing a litany of sexual harassment allegations.


Ailes, who has denied all of the allegations against him, was forced to resign from Fox News just one week after that interview.

The president also came under fire amid the infamous "Access Hollywood" tape, where he's heard boasting about assaulting women. "I just start kissing them.

It's like a magnet. Just kiss. I don't even wait," he told then-"Access Hollywood" host Billy Bush.


In the tape, Trump brags about how being a star means "you can do anything," including "grab them by the pussy."