The officers claimed that they were searching for a black shooting suspect, and they later apprehended the actual suspect on the roof of the building. But not until after they had cuffed and beaten Lanier.
“They didn’t have a good description of who they were looking for. That doesn’t give you the right to go into a store and grab the first black person you see and throw them to the ground,” his attorney, Fred Brewington, told 1010 WINS. “The fact that he happened to be a black male in the store does not make him a culprit, it does not make him a suspect.

Lanier became emotional as he recalled the incident.

“I’ve never been cursed, physically abused, beaten and treated like a slave as I was two days ago,” Lanier said. “For somebody to grab me by the neck in the supermarket, and I’m telling you, ‘I’m one of you,’ and you disrespect it — it was like you’re just another black dude.” 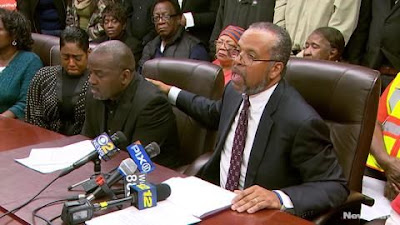 “They cursed at him, they abused him verbally, they then start to beat him,” Brewington said. “He was taking blows with his hands cuffed behind him as he laid facedown.”
Now, Lanier is calling for the officers to be stripped of their badges for violating his civil rights.
“I’m tired of hearing officers constantly talking about we have to retrain. We don’t have to retrain, we got to let them be held accountable for their actions,” Lanier said. “Imagine if I had my gun at that time. It could have went either way.”