The genial actor reportedly had a heart attack while playing hockey with one of his sons. He was transported to a Los Angeles area hospital on Tuesday afternoon and pronounced dead.

Robin Thicke he called his father “the greatest man I ever met” and “always a gentleman.” He confirmed that Thicke suffered a heart attack while playing hockey with his son Carter, and that one of the last things he said was a compliment to his son on a nice shot. 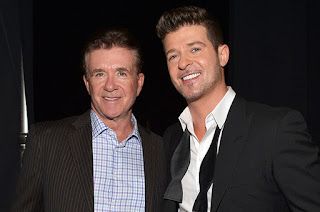 “The good thing was that he was beloved and he had closure,” said Robin Thicke, who credited his dad, an accomplished musician himself, with being an inspiration and very supportive of his music career. “I saw him a few days ago and told him how much I loved and respected him.”

Thicke is survived by his wife Callau; his two sons with Loring, Brennan and Robin; and Carter, his son from his marriage to Gina Marie Tolleson.


BHR Wishes Condolences To The Family Of Alan Thicke .