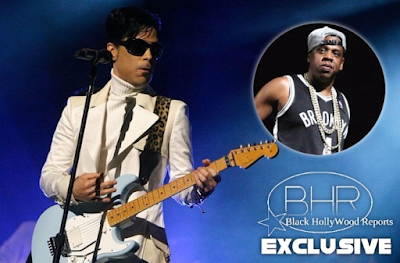 BHR Hollywood Reports............Prince’s estate is suing rap mogul Jay Z over who has the rights to stream the late superstar’s music.

Sources involved in the deal tell reports the estate fired off a letter to Jay's team last month, saying it had no interest in signing a deal for "Roc Nation to exploit any of the intellectual property assets of the Estate."

We broke the story, Jay Z had offered around $40 million to take control of Prince's unreleased tracks.

The lawsuit acknowledges that before Prince’s death on April 21, his NPG entered into an agreement with Tidal to stream and sell “the next newly recorded studio LP by the recording artist known as Prince.” The album was “HitNRun: Phase 1.” The letter of intent, dated Aug. 1, 2015, gave Tidal exclusive rights to the material for 90 days, the lawsuit said.

But, the complaint said, Roc Nation, through Tidal, started on June 7, 2016, “exploiting many copyrighted Prince works in addition to the works that comprise the ‘HitNRun: Phase 1’ album.”

The suit said that on Oct. 21, Nov. 7 and Nov. 11, Roc Nation filed documents in Carver County District Court that asserted it had “both oral and written” agreements to exclusively stream Prince’s entire catalog of music on Tidal. But Roc Nation did not provide any documents to support that claim despite numerous written requests to do so, the lawsuit said.

The estate does acknowledge Prince made a deal with Jay for the 2015 release of his final album, "HitNRun Phase One" -- but also says it hasn't found proof of a $750k payment to close that deal.