BHR HollyWood Reports....... The First Us Attorney General has past away at the of 78 fighting along battle with Parkinson's disease.

Reno served in the Clinton White House From 1993 to 2001.  Reno was the  attorney who played the pivot role in the saga of six-year old Cuban immigrant Elian Gonzalez.. 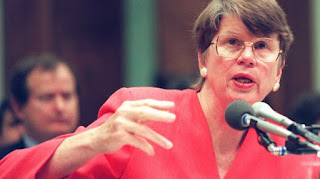 Born in 1938, Reno grew up in Miami, Florida, with parents who both worked as reporters for Miami newspapers. After attending Cornell University for her undergraduate degree, Reno enrolled at Harvard University for law school in the early 1960s. During her first year, she heard one of her heroes, First Lady Eleanor Roosevelt, speak at the Sanders Theater.
"She was so wonderful and her voice was still so clear and so magnificent," Reno later recalled in a 1993 speech to the Women's Bar Association. "And I went up to her afterwards, and I said, "Mrs. Roosevelt, I think you are perfectly wonderful." And I will never forget her looking at me and saying, 'Why, thank you, my dear. Those words mean so much to me.' And she seemed to mean it."