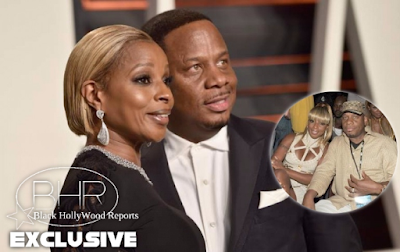 According to one source, the 45-year-old "Thick of It" singer, allegedly has sent Isaacs a thinly veiled threat, that if he doesn't back down, she will began posting pictures of the women he slept with during their marriage.

Isaacs, 49, grabbed headlines after it was revealed that he wants his estranged wife to pay him nearly $130,000 in temporary spousal support, of which includes $8,000 for private chef, $3,200 for his personal trainer, $71,000 for his rental properties, $21,677 for him to make charitable donations, and $5000 so he can pay child support for his two kids from previous relationships.

Recently mary has spoken out about her marriage

“No one wants to go through this, and this is hard,” she told Robin Roberts.

“The breaking point was when I kept asking over and over and over again for respect and to be respected. And it just seemed like I was beating a dead horse,” Blige told Roberts.

“It seemed like I was talking to a wall. I just wasn’t getting it back so if I can’t get respect in the relationship, then I have to move on and save myself.”

According to reports, Isaacs is reportedly requesting about $130,000 per month from Blige in spousal support

. Blige told Roberts that it’s important for any woman going through a divorce to keep control of their
finances.

“You have to handle your business. You have to take responsibility and stay on top of it because things like this will happen if you don’t. You need people that will help you, but they can’t do everything for you. You have to be in the mix of it.”

In the months since the split, Blige released a “personal” single, “Thick of It.”

“It’s almost painful to let it out,” Blige said of the track in a press release. “I don’t hold back though. It’s not who I am and there’s no way I am going to start changing now.”