BHR Hollywood Reports.......Moniece Slaughter is shutting down a rumor claiming former basketball player Shaquille O’Neal got her pregnant. The “Love & Hip Hop: Hollywood” star revealed in 2014 that she once dated Shaq, but addressed the baby allegation on social media saying that it was impossible for her to get pregnant by the athlete.

According to gossip blogger Jason Lee, the former NBA star allegedly had relations with Love and Hip Hop: Hollywood star Moniece Slaughter while he was still married to his now ex-wife Shaunie O'Neal (who stars and executive produces Basketball Wives, which airs on the same network as Love and Hip Hop).

Lee, who is a recurring character on the VH1 show alongside Slaughter, didn't mince words when exposing the secret relationship over social media. 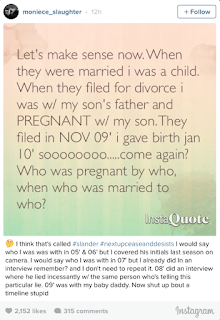 Moniece also commented on the rumor in an Instagram post telling fans that she was advised by her legal team to not address the “lies being told via social media” and to “let the courts deal with it.”

“No comment,” she wrote in the caption of her Instagram post. “Sad day when you’ve done literally nothing to an individual. A man at that. And he makes it his mission to do what he thinks is destroying you. But ultimately will damage the one individual who has nothing to do with any of it. My child. And if it weren’t for that, I’d let them keep it up.” 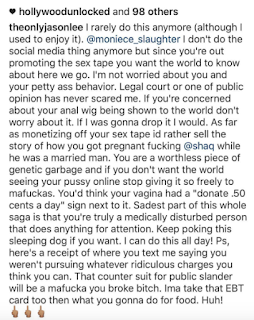