BHR Hollywood Reports..........On Monday, Tamir Rice's family finally got some closure — one and a half years after police shot and killed Rice, a black 12-year-old — with the city's decision to pay $6 million to settle the lawsuit over the shooting.

Then, the local police union responded to the settlement with a letter to media: 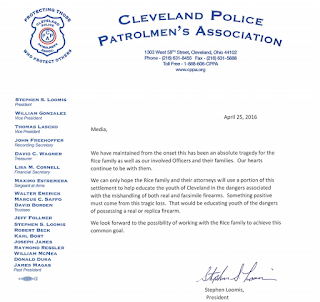 Under the terms of the agreement, which still has to be approved by a probate court, the city will pay $3 million this year and $3 million next year to settle the lawsuit. The bulk of the money will be paid to Rice’s estate.

The settlement does not include any admission of wrongdoing, U.S. District Judge Dan Polster wrote in a one-page document filed Monday.
“Although historic in financial terms, no amount of money can adequately compensate for the loss of a life,” attorneys for Rice’s family said in a statement.

“Tamir was 12 years old when he was shot and killed by police — a young boy with his entire life ahead of him, full of potential and promise. In a situation such as this, there is no such thing as closure or justice. Nothing will bring Tamir back.”

In an interview Monday, Rice family attorney Subodh Chandra said the settlement is cold comfort for Tamir's family, who feel robbed of a fair grand jury review of the boy's slaying.

"They lost a child," Chandra said. "And they also feel, correctly, that they were cheated out of a fair criminal justice process. ... If the process had been fair, the family would have been willing to accept whatever result came out of it.

But because it was so transparently unfair, it's just hard for them. There is no justice here, and they will never have their beloved child back."