BHR Hollywood Reports...........Deputies from the Santa Clara County Sheriff's department were called to 1 Infinite Loop around 8:35 a.m. on Wednesday.

They found a man inside an Apple (AAPL, Tech30) conference room and declared him dead at the site, Sergeant Andrea Urena said at a press conference Wednesday afternoon. 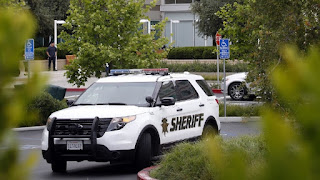 "No one else was involved, there was no danger to the public, there was no foul play," she said, adding that the employee's name and age are being withheld out of consideration for his family and co-workers.

Urena said that it was likely the county coroner's office would be conducting an autopsy as is standard procedure for an unknown cause of death.

Early reports had suggested that a gun was found next to the body. However, Urena said she was not aware of the source of those reports and would not confirm or deny them.

Apple did not return a request for comment. The Santa Clara County Coroner's Office will conduct an investigation into the incident and determine the cause of death. The Apple building remains open for business.

The incident comes one day after Apple announced disappointing earnings. It was the company's worst quarter in over a decade.