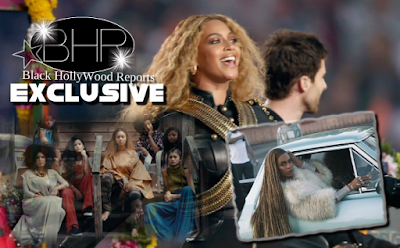 BHR Hollywood Reports.............Beyoncé has once again outdone herself.

With few details announced in advance of her LEMONADE one-hour special on HBO, the pop icon debuted her new album as a film, featuring Serena Williams in a segment and contributions from The Weeknd and James Blake.

Beyonce's visual album Lemonade is a feast for the senses from start to finish, and the fashion it showcases is no exception. With everything from gothic Victorian gowns to street-worthy oversize furs, the looks seem to belong in both the past and the future.

She told the story of a woman not to be trifled with. The "visual album" offered something the music world has never seen before. The Internet responded accordingly.

"Lemonade" was an ode to black women, and a deeply personal story at the same time. Beyonce shared home movies of her father, her wedding to rapper Jay Z, her pregnancy and daughter Blue Ivy's birthday party.

Beyonce also made a statement through the appearances of women holding photos of black men who have been killed. Among the women were the mothers of Trayvon Martin and Michael Brown, who held images of their late sons. The chapter was marked "Resurrection."

The nuanced and layered lyrics touched on many other themes, including infidelity, though it wasn't clear who was being referenced.

That led to fans trying to read the tea leaves regarding the state of Beyonce's marriage to Jay Z.

There have long been rumors, which were heightened in May 2014 after the infamous elevator incident involving the couple and her sister, Solange Knowles.

But the video presentation Saturday ended on a happy note for Bey and Jay, featuring images of them as a happy family along with daughter Blue Ivy.