BHR Hollywood Reports...........Tisha Campbell Martin is not going to allow Keith Douglas cousin start a rumor about her being gay.

A few days after blasting Keith Douglas on social media.

The veteran actress and singer came after his cousin,who accused her and Tasha of being lesbians.

Chile [please] you are trying to [attack] my morals and ethics, thinking it’s going to make me cower?

It is a part of my JOB description to anticipate people attacking my character.

I do this for a LIVING, so sweetheart nothing you say, no lie you spew can penetrate my soul.

The lesbian thing you’re going for with me and Tasha?

Not only is it untrue but you’re laughable. You’re making yourself look crazy.

She continued: "Anyone on this Facebook page or any other can go down to the courthouse and you will clearly see that he was married to two women at the same time.

Now how are you going to make that go away? What bible verse will you use for THAT one? Stop using my savior to cause harm to women and his people." 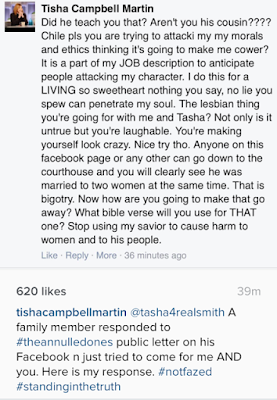